Head Injuries – What to Do 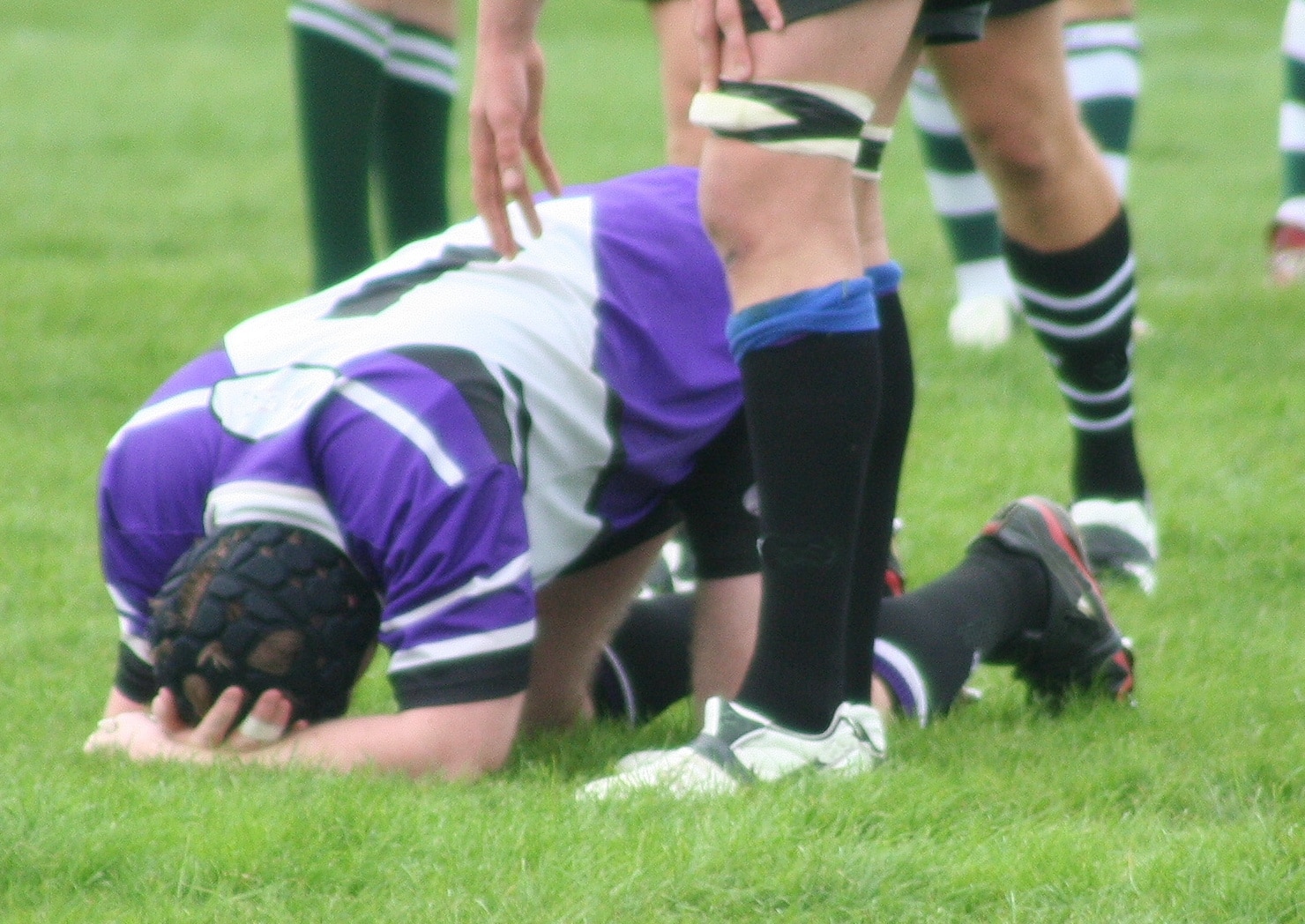 Head injuries in sport continue to be a major concern.

This concern has led the Scottish Football Association to announced they are set to introduce a ban on children under the age of 12 heading the ball in training sessions.

The ban has resulted from research demonstrating a proven correlation between football and dementia. A report has shown that former professional footballers are 3.5 times more likely to die with dementia and other serious neurological diseases.

The Scottish FAs are quick to emphasise that their ban on under-12s heading the ball in training should not lead people to assume it is therefore safe for older children. Repeated head injuries are not good for our brains! Angus Hunter from Stirling University stated that when young people head the ball it causes electrical disturbances in the brain, disruption to muscles and a reduction in memory recall. When children head the ball in training, they are repeating the event multiple times and this can adversely affect their brains.

A similar ban was put in place in the US since 2015. But Scotland would become the first European country to impose a restriction on head contact.

Dr Angus Hunter suggested that a softer lighter ball could cause less potential damage. This would reduce rates of concussions, which is far greater in children, and improve memory recall.

Like with football, rugby and head injuries are cause for concern, especially for women.

Rugby is one of the fastest growing sports for women and one of the few sports where men and women play in exactly the same way.

But recent research suggests female players are at a greater risk of suffering concussion than men – and the effects are more severe.

Swansea University is carrying out a pioneering study to understand why. The work is also studying if changes to the way female rugby players train can cut the risk of concussive injuries.

Elizabeth Williams, a senior lecturer in biomedics at the university’s college of engineering, is behind the study. She said: “Head impacts in the men’s game are usually caused by player to player contact whereas with the women it’s often head to ground, or head to knee.” It is therefore important to treat a injury in line with how it was caused.

Head injuries – what to do? 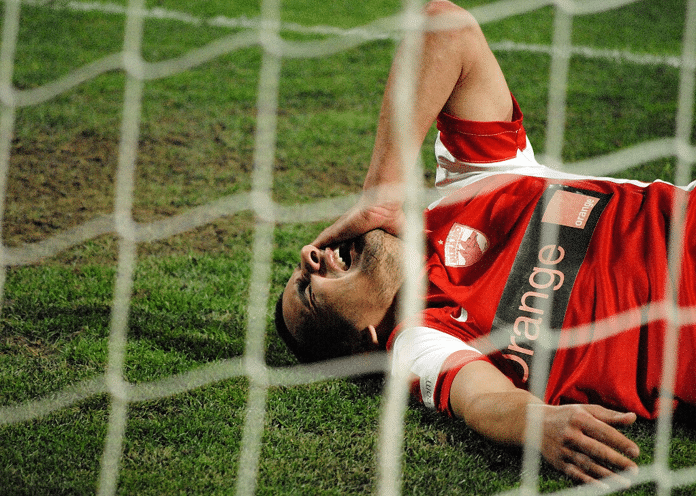 When people bang their heads, it can be difficult to tell whether they have done any serious damage. Most head injuries are not serious and simply result on a bump or bruise. However severe, or repeated head injuries can cause damage to the brain.

Fortunately, the majority of falls or blows to the head result in injury to the scalp only and this is more frightening than life threatening. As the head and face are served by numerous blood vessels, these injuries bleed profusely and can be very scary!

It is very important to look out for anything unusual following a head injury as a severe bang on the head could cause swelling and damage to the brain and it is vitally important that you recognise any early and worrying signs of increased pressure on the brain.

Not sure what the signs are? We’ll tell you now.

First steps in the event of a head injury

For a child, look out for:

If the casualty is not an infant, has not lost consciousness, and is alert and behaving normally after the fall or blow:

The brain is cushioned by cerebrospinal fluid, however a severe blow to the head may knock the brain into the side of the skull or tear blood vessels.

It can be difficult to determine the level of injury, so it’s always wise to discuss a head injury with your doctor. A clear indicator of a more serious injury is when someone loses consciousness or has signs of confusion. These symptoms can come on at any time from immediately after the accident to a couple of days later. If it is a child that is injured it is sensible for them to sleep in the same room as you for a couple of nights following a head injury. 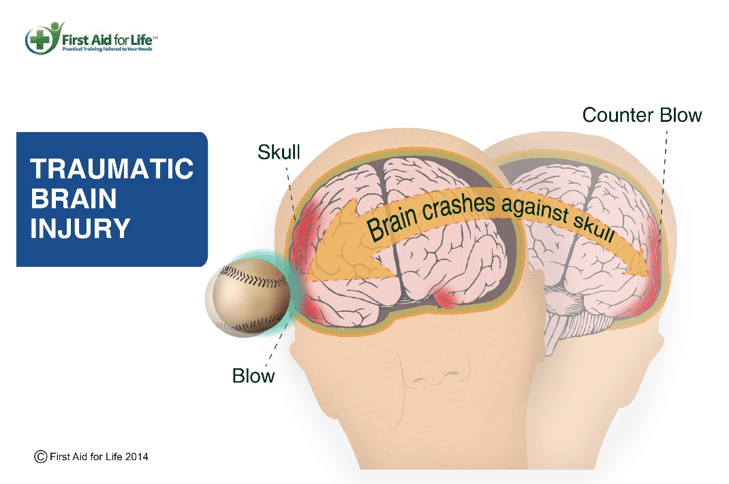 Signs of a serious head injury

Call an ambulance if someone shows any of these symptoms:

What to do if someone is unconscious:

Initial symptoms of concussion – in football and rugby the most common symptoms that you may see on the pitch are the following:

Concussion can also affect someone’s mood, balance, sleep, thinking, concentration and senses. Most symptoms resolve in 7-10 days and many much sooner.

Children and adolescents may need one or 2 days off school and a gradual return to academic study. They can start light reading and small amounts of screen time but should monitor and stop if there are signs of any recurrence of symptoms.

At least 2 weeks with no training to give the brain a chance to fully recover.

Coaches and first aiders should be confident to:

Remove – any player who has experienced a head injury and shows any of the above symptoms should be removed from play immediately.

Recognise – learn the signs of concussion. Only about 10% of people experiencing concussion will actually be unconscious, therefore the other 90% of people who have experienced concussion will remain conscious. Look out for the more obvious signs such as a dazed or blank expression or tonic arm extension following the blow to the head; along with the symptoms listed above.

Applying a wrapped ice pack will reduce superficial bruising and swelling – but has no effect on any brain recovery.

If a severe head injury has been sustained and you are concerned about the casualty’s spine; they should only be removed from the field by someone appropriately trained to do so. If worried and no one appropriate to help; reassure the casualty, support their head in a neutral position, stop the game – or move to another pitch and await removal of the casualty by paramedics.

Recover – Ensure the player remains completely symptom free before contemplating any form of return to play. 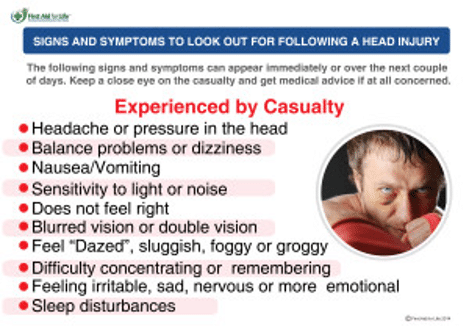 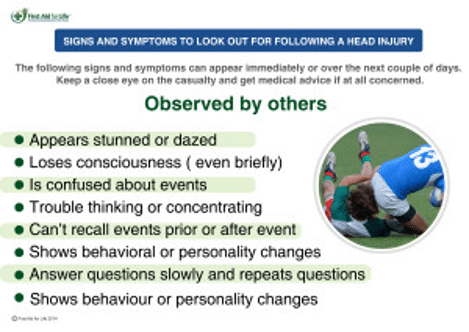 It may take 4-6 weeks before a player is fully fit and back to competitive play. This may seem a long time away from the game. However, it is comparable to the recovery time following a soft tissue injury and your brain is so important to every aspect of life, that it is vital we take head injuries seriously.

The RFU have a superb online training course specific to parents, players, teachers and coaches. http://www.englandrugby.com/my-rugby/players/player-health/concussion-headcase/

The Football Association have the following:

It is strongly advised that you attend a Practical First Aid course to understand what to do in a medical emergency. Please visit firstaidforlife.org.uk or call 0208 675 4036 for more information about our courses.

Onlinefirstaid.com have developed unique on-line first aid training to allow you to learn these vital skills at a time and place that suits you.