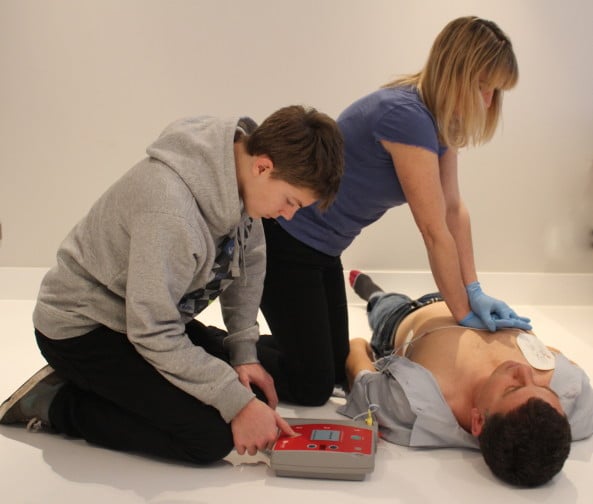 A defibrillator is a life-saving machine that gives the heart an electric shock in some cases of cardiac arrest. This is called ‘defibrillation’ and can save lives.

Cardiac arrest is when the heart stops pumping blood around the body. When someone has a cardiac arrest, defibrillation needs to be prompt.

For every minute that passes chances of survival decrease by 14%.

Research shows that applying a controlled shock within five minutes of collapse provides the best possible chances of survival.

It means defibrillators, also known as automated external defibrillators (AEDs), need to be placed strategically – areas where there is a high incidence of cardiac arrest and where it is difficult for an ambulance to get quickly.

Rural areas, communities with poor road networks or traffic congestion and where large crowds gather are all places where we need defibrillators the most.

AEDs (Automated External Defibrillators) are for you to use in an emergency, on someone who is unconscious and not breathing.

It’s very easy to use an AED. The rescuer turns the machine on which then gives ‘voice prompts’, telling the rescuer what to do. The rescuer will be asked to puts the pads in position on the person’s chest. These pads detect electrical activity in the heart and will be able to tell if a shock is needed.

Anyone can use an AED, but it is preferable that people receive training first. It would be better if more people were trained in CPR, which buys time before defibrillation.

How a defibrillator saved Gary’s life:

Gary Humphries, 54, from Caerphilly, owes his life to staff at his local leisure centre.

I wouldn’t be here today if it wasn’t for their quick response and skills and the fact there was a defibrillator in that leisure centre.
He would have died if the centre had not had a defibrillator funded by the BHF. Two members of staff had recently been trained how to use the equipment , it was the first time they had needed to put their training into practice.
The staff were at the scene within a minute and applied a shock from the defibrillator within two minutes. The shock revived Gary, who had been clinically dead for those two minutes. There is no doubt their speedy response saved Gary’s life.

After his cardiac arrest, it took five days before Gary came around. He underwent angioplasty surgery and had a stent fitted to improve his blood flow through his narrowed arteries. He is now taking beta blockers, statins and other drugs and has returned to work as a material controller for Rolls Royce engines.

Gary says: “I owe those guys my life. I didn’t even know what a defibrillator was before that day – I certainly do now!”