Knife Crime – Would You Know How to Help with Major Bleeding? 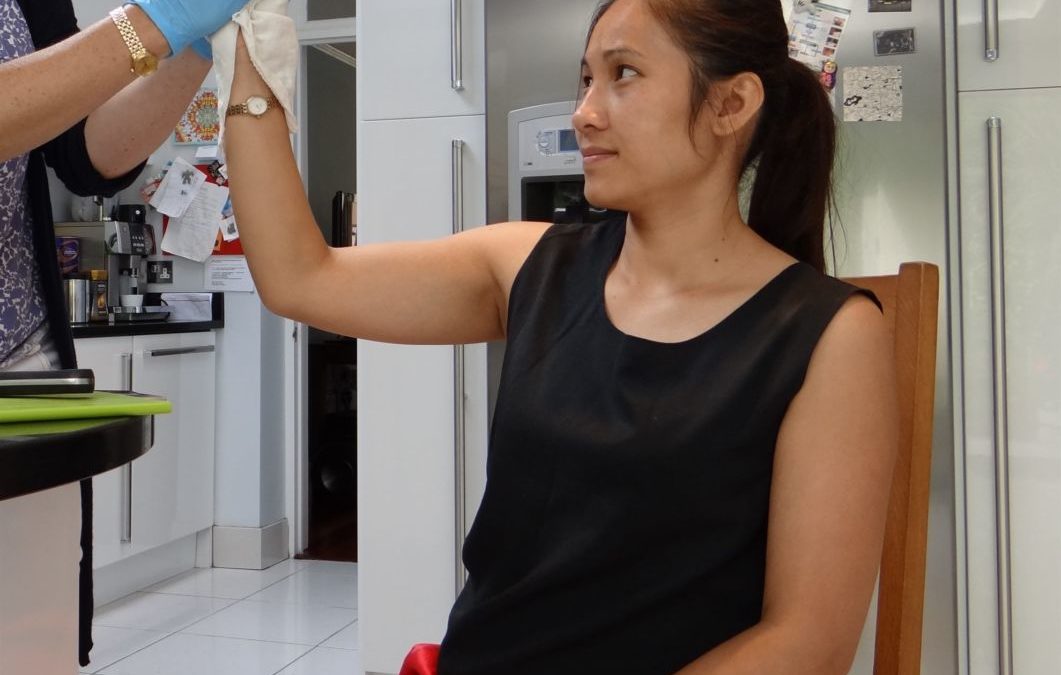 Knife crime is at a record high in the UK.

Just yesterday, a normal high street in South London was the scene of a terror attack. A man stabbed innocent passers-by before he was shot down by the police. He severely injured 3 people. Luckily, no one is in a critical condition. Particularly in this situation, First Aid is vital. One man said there was blood ‘everywhere’. Luckily, he had a blanket in his bag.  Thus, he could use it this to help stem the bleeding while he hailed an ambulance. Would you know how to help with major bleeding while also keeping yourself safe?

As we settle into 2020, Sky News revealed that the police and courts in England and Wales are dealing with the highest number of knife crimes in a decade.

Every day the news report yet another story of injury or fatality related to knife crime. It is an endemic threatening our children which is sadly becoming the norm.

In London alone, there were more than 15,000 offences last year. Labour MP Florence Eshalomi warned Londoners risked becoming ‘desensitised’ to knife crime. She told the Commons about how she felt scared after coming across a teenager bleeding from knife wounds in his legs. Eshalomi said she felt disappointed that many passers-by walked on while she ‘frantically’ alerted the emergency services.

The Importance of First Aid

It is important to know how you can help if you end up in a situation like this. In this way, you can react in an effective and calm manner.

Catastrophic bleeding is a common result of stab wounds but is not just confined to crime. It can happen any time and anywhere. It can occur as a result of DIY injuries, accidents in the kitchen or even after a slip of a saw whilst cutting branches in the garden. There are some very simple steps to follow that could help enormously and save lives. Read on to find out what to do for treating major bleeding and shock, should you be first on the scene at such an accident. This article will help you learn how to help someone who has been stabbed or seriously bleeding.

If someone is bleeding the priority is to stop the blood coming out! ALWAYS WEAR GLOVES WHEN DEALING WITH BLEEDING

It is never a priority to wash a major injury – it will be cleaned in hospital. 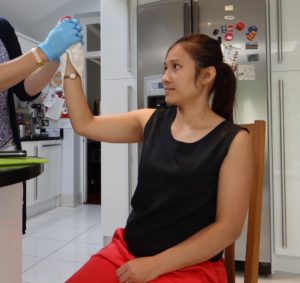 Sit or lie the person down – to manage shock and prevent them from feeling dizzy and faint.

Examine the area to see if there is anything stuck in the wound – if there is do not remove it.

Elevate the bleeding area above the level of the heart to slow down the bleeding. Please note that latest guidelines no longer recommend elevation. This alone will not stop bleeding and pressure is more important.

Pressure – apply direct pressure on the wound to stop the blood coming out.

Shock is ‘a lack of oxygen to the tissues of the body. The most likely cause is a fall in blood volume or blood pressure.

It occurs as a result of the body’s circulatory system failing to work properly. That means the tissues of the body, including the heart and the brain, struggle to get sufficient oxygen. The body’s response to this is to shut down the circulation to the skin. Therefore, it becomes pale, cold and clammy. The heart speeds up as it struggles to get sufficient blood supply and oxygen and to draw the blood away from the gut. Thus, the casualty may feel sick and thirsty. They may also feel anxious, dizzy and a bit confused. This is because their brain suffers from the lack of oxygenated blood too. 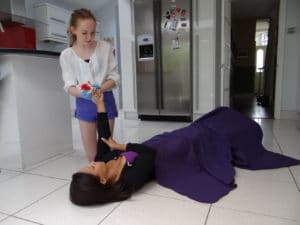 If the person is pale, cold, clammy and showing signs of shock, or if there is a lot of blood – help their circulation by lying them down and raising their legs. Elevate the bleeding wound and apply direct pressure to control the bleeding.

Keep them warm and get emergency help.

How much blood can you afford to lose?

A person has approximately 0.5 litres of blood per 7kgs of body weight or one pint of blood per stone (although this does not increase if someone is over weight). An ‘average’ adult has roughly 10 pints / 6 litres of blood. If they lose about a 5th of their blood volume it can cause the body to shut down and go into shock.

If someone is bleeding extremely heavily from either a major artery or vein, they can lose a lot of blood very quickly. The bleeding is likely to pulsate in time with the heart. This is more pronounced with an arterial bleed, but can also happen with a venous bleed. With extremely heavy, potentially catastrophic bleeding an adult could easily lose 40% of their blood volume in 3-4 minutes. this could be even quicker when dealing with children.

The treatment of all bleeding remains the same:

The first step when treating a catastrophic bleed is always to apply direct pressure. It is still likely to be the first and only solution needed for the casualty.

In environments where a catastrophic bleed is likely; tourniquets and haemostatic dressings should be an integral part of the first aid kit. All First Aiders should be trained in their use.

For the general public; you are highly unlikely to need to use a tourniquet. However understanding how to improvise and how and when to use one, could save lives if you were involved in a major medical accident or emergency.

One of the easiest way to make an improvised tourniquet using the contents of a standard First Aid kit is to use a triangular bandage folded into a broad fold bandage and tighten the tourniquet using your scissors as a windlass. If you have access to cutlery, such as a table knife, this would be even better. Otherwise you no longer have your scissors available to use!

Please note: A tourniquet should be at least 4cm wide to prevent localised damage to nerves tissues.

If there’s a clean cut through an artery, for example deep incised wound, the artery can contract back up the arm or leg. This is why, it is recommended to place the tourniquet at least 5cm (or 2 inches) above the wound.

You may find other guidance on the positioning of a tourniquet, such as applying the first tourniquet mid-point over a single bone. This advice is also acceptable, so long as you position the tourniquet proximal to the wound (closer to the trunk of the body). 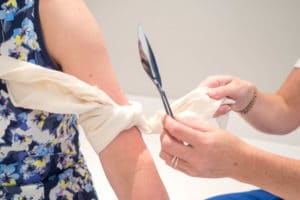 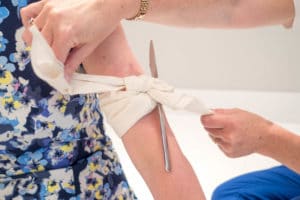 Use the knife or your scissors as a windlass to wind round and tighten the tourniquet. 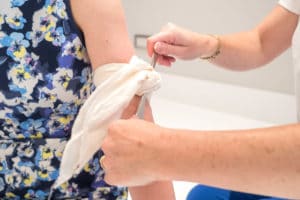 Please note: it will be extremely painful for the casualty to have a tourniquet, but it is absolutely vital that you apply tourniquet tight enough to entirely stop the bleeding.

If a tourniquet is not on tight enough it can make things worse. It can occlude the veins, but arteries may be harder to stop as they are less easy to get to. If the venous return is stopped by the tourniquet, the only place for blood to come out is from the wound.

NEVER be tempted to loosen or remove a tourniquet. Once you have applied it, ONLY a doctor in a hospital setting should remove the tourniquet

There are many initiatives operating around the country to try and curb the increase in knife crime and the numbers of our young people being injured and killed in this way. One proven initiative aimed at both preventing weapon carrying and increasing the chance of survival following an attack, is to teach these young people first aid.

First Aid for Life can help.

We are a multi-award-winning, fully regulated first aid training business with experience working with schools, Young Offender Institutes, PRUs, voluntary organisations, charities and Youth clubs nationwide, to teach young people the vital skills they need to save a life, should the worst case scenario arrive.

Our new ebook on first aid for stabbings is a useful resource to educate and inform young people and youth organisations on the dangers of street crime. Moreover, it is a helpful guide to ensure people know what to do if they encounter a stabbing victim.

First Aid for Life specialises in empowering young people with the skills and confidence to keep themselves and others that bit safer. We teach them that carrying a weapon makes you more at risk. The risks of carrying weapons such as knives, guns and acid and the damage this can do, are clearly explained.  We equip young people with the skills and confidence to help each other in a first aid emergency, giving them both general first aid training as well as specialised first aid training encountered in a street crime context.

We run courses for young people and youth workers across the country, who welcome the opportunity to learn how to treat serious and catastrophic bleeds with improvised and manufactured tourniquets and packing. Training can be entirely adapted to your needs and budget. We can blend practical and online modules.

Our trainers are highly experienced medical, health, military medics and emergency services professionals, who will tailor any training to your needs and the needs of the children and young people you are working with. Our trainers are all DBS cleared and superb at teaching engaging practical courses to children, young people and adults.

We strongly recommend that you attend a Practical First Aid course to understand what to do in a medical emergency. Please visit https://www.firstaidforlife.org.uk and http://www.onlinefirstaid.com for more information about our practical and online courses and to access free resources.
First Aid for life provides this information for guidance and it is not in any way a substitute for medical advice. First Aid for Life is not responsible or liable for any diagnosis made, or actions taken based on this information.