Sepsis is a devastating and extremely serious condition that affects over 150,000 people and kills over 44,000 people in the UK every year – more than bowel, breast and prostate cancer combined; it is often responsible for brain damage and amputations. Sepsis occurs when an infection enters the body and the immune system goes into over-drive and self-destructs; attacking its own tissues and major organs. Sepsis result from any infection, even something as minor as a small cut or bite, sore throat, chest or urine infection. Unless treated extremely promptly with fluids and antibiotics, sepsis can lead to multiple organ failure. For every hour’s delay, a patient’s chance of dying increases by 8 per cent.

This month a new film is out – Starfish. It tells the true story of Tom Ray; who at the age of 38, suddenly, without warning, contracted sepsis. His arms and legs all had to be amputated, along with most of his face. His wife was 9 months pregnant After five months in a coma, he woke to find that he had a new baby son.

Tom’s story in his own words– from http://blogs.deloitte.co.uk/health/2016/09/the-uk-sepsis-trust-and-starfish-a-powerful-story-of-a-sepsis-survivor-why-raising-awareness-is-key

“Despite it all, I feel like the happiest man in the world. Sepsis cut me down in my prime. It tried to overwhelm and destroy me, but with the support and inspiration of my family I fought back, and I beat it. It’s been the challenge of my life, but I have dealt with every setback, taken every small opportunity to make progress, and now I feel strong.

Waking from my coma in hospital, I couldn’t remember who I was, and I didn’t recognise my wife. My arms, my legs and my face had been amputated. I couldn’t understand why. ‘Sepsis’, they said, a random killer infection that strikes without warning. I’d never heard of sepsis, but I soon learned that it affects over 150,000 people every year in the UK, resulting in some 44,000 fatalities.iii

44,000 deaths, every year! Imagine a Premiership football stadium, full of supporters, then every person there suddenly dying without any warning. Think about all the husbands, wives, partners and children that are left wondering why. Sepsis strikes like a wildfire in a forest, it changes lives and snatches them away in a matter of hours.

The condition can develop rapidly following even the mildest of infections, like a urinary tract infection or a sore throat. For reasons little understood, the body’s immune system overreacts to the initial infection, attacking its own tissues and organs.

The real difficulty from a medical point of view is that the onset is hard to diagnose, with varying generalised symptoms including vomiting, high temperatures and body rashes. Sepsis will often strike at the point where the body’s immune system is lowered for some reason. In my case, I’d recently had dental intervention, and it’s possible that the infection was introduced then. But nurses, doctors and even Intensive Care consultants can easily miss the signs of sepsis. My early symptoms were reported to my GP and he disregarded them; when he saw me on return from hospital with my amputations, he broke down in tears.

I remained in hospital rehabilitation for seven months and over the next five years I underwent a long series of painful operations to reconstruct my face. I now have two robotic arms, myoelectric hands that grip and rotate and two false legs. My employer, the catalogue clothing company, Lands’ End, helped me get back into the workplace, to develop new skills and to be involved with the world again. I will never forget that they gave me a chance to start afresh when no one else would look at me.

I work, I drive, I’m a grateful husband and a proud father. I go to the football on Saturdays. I’ve built a strong network of friends and supporters and I work actively to maintain a positive mind-set that places teamwork and compromise at the heart of all my activities. My wife Nicola (Nic) has saved my life on many occasions with her unstinting devotion. I owe everything I am to her. Every morning when I wake up, her smile greets me like sunshine.

At the same time, with every week that passes, I’m reminded in the news that someone else has fallen victim. Often it’s a child, like the two and a half year old little girl I heard about recently; five years on, her mother still can’t look at her photograph. There are a thousand such instances of children who die from sepsis every year. And I recall the story of the middle aged mother of two young boys admitted to hospital with flu-like symptoms who died there from sepsis within twelve hours. Her husband’s simple, dignified, words stick in my mind: “I feel lost.” I think of the 78 year old ‘Nana’ who thought she was having an off day and went to bed to rest while her granddaughter went to Tesco to buy her some soup, but while she was away, Nana died alone of sepsis.

All these people, all these thousands of them, they are my people. We are connected. We stand and suffer together, we are weak and strong, and we are dying and living and remaining defiant together. Their memories are with me.

Making the film ‘Starfish’ has been a unique experience. It’s very strange to have your own life portrayed on screen. I started out as an actor, so being on set and being involved with the production was a bit like finally going home after all these years. Sitting with Nic watching the premiere at the Edinburgh Film Festival, I realised just how unbelievably grateful I am to have beaten sepsis.

It has been the fight of my life. I did it for myself, for my beautiful wife and my amazing children. For every other single person affected by sepsis, the whole world over. And I’m glad I did.”iv

Although Sepsis is extremely difficult to spot, there may well be clear indications that someone is becoming seriously unwell. This article aims to flag key warning signs that you, or someone you love could have Sepsis.

Sepsis is a common and potentially life-threatening condition where, following an infection, the body’s immune system over reacts; resulting in widespread inflammation, swelling and blood clots. This leads the body to go into septic shock, causing a dramatic decrease in blood pressure which interrupts the blood supply to vital organs such as the brain, heart and kidneys. Sepsis needs to be treated quickly and aggressively in hospital and is sadly often causes amputations, brain damage and deaths. It is vitally important to recognise symptoms early and treat promptly.

One of the most common ways of developing Sepsis is following an operation or injury where the wound becomes infected, or as a secondary infection following an illness such as a chest infection or sore throat. Sepsis can follow on from Meningitis and some of the symptoms are similar.

Always regularly check wound sites following injuries or surgical procedures. If the wound becomes hot, itchy, swollen or red – you should seek medical advice promptly as this can be an early sign of infection and they should receive prompt and potent antibiotics to treat the infection and prevent it spreading.

Possible Signs and Symptoms of Sepsis

Unfortunately early Sepsis can be a difficult condition to recognise and often takes a while to diagnose, during which the casualty deteriorates rapidly. There is a major campaign to raise awareness of possible early signs as the sooner it is identified and treatment started the better the outcome for the patient.

There are 6 key signs and symptoms that we are encouraged to look out for and they are listed in the chart below.

The Sepsis Trust has issued the guidance below to help parents and child carers quickly recognise the signs and symptoms in children: http://sepsistrust.org/

Sepsis can be hard to recognise at first as early symptoms are similar to flu and other common illnesses, they are also similar to Meningitis. 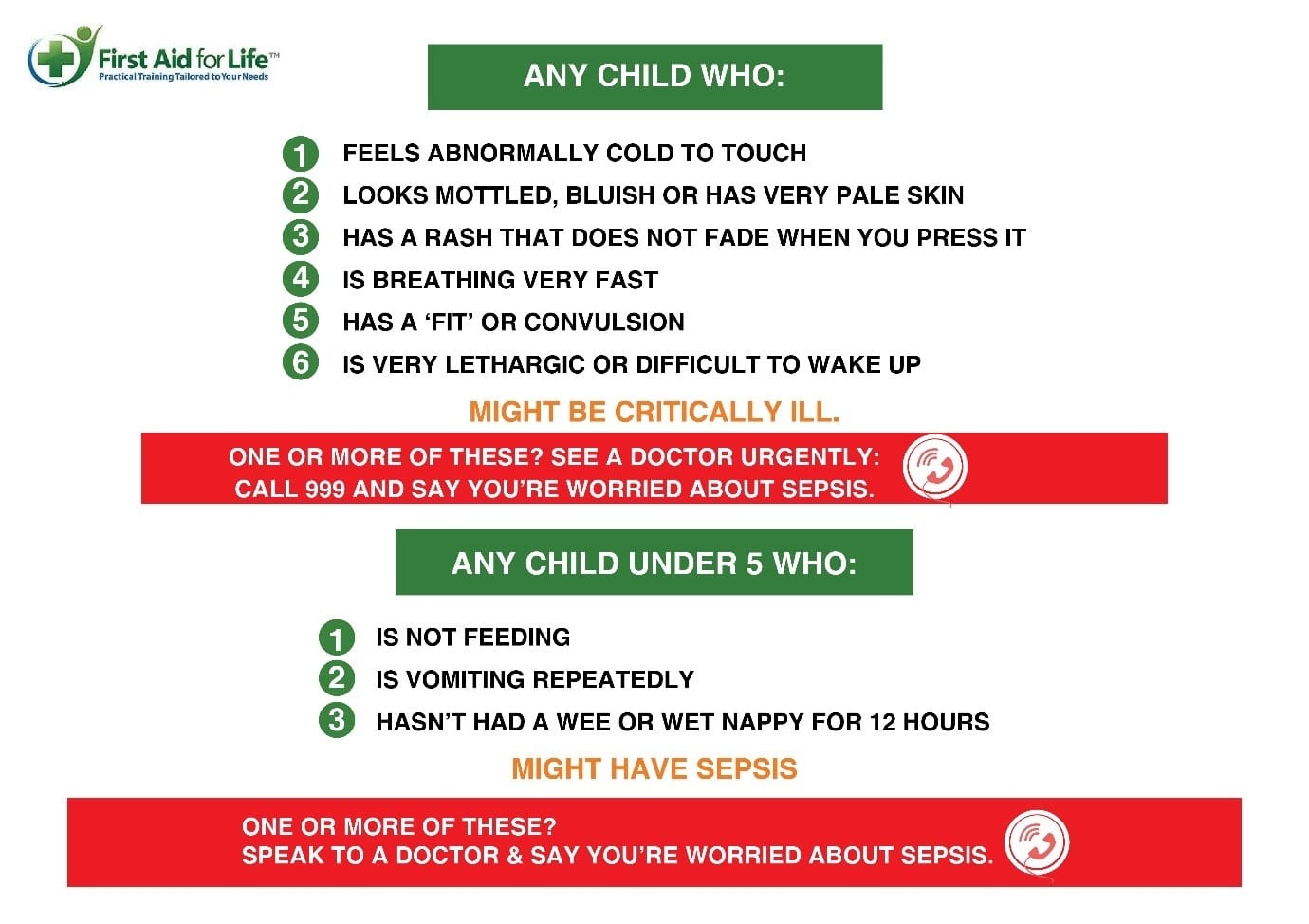 When to go to get medical help:

If you are sent home from the hospital or GP Surgery and the casualty is getting worse. Return again. Trust your instincts and tell them you are worried!

It is strongly advised that you attend a Practical or Online First Aid course to understand what to do in a medical emergency. Please visitfirstaidforlife.org.uk or call 0208 675 4036 for more information about our courses. First Aid for life provides this information for guidance and it is not in any way a substitute for medical advice. First Aid for Life is not responsible or liable for any diagnosis made, or actions taken based on this information.