First Aid for Stabbings – how to help 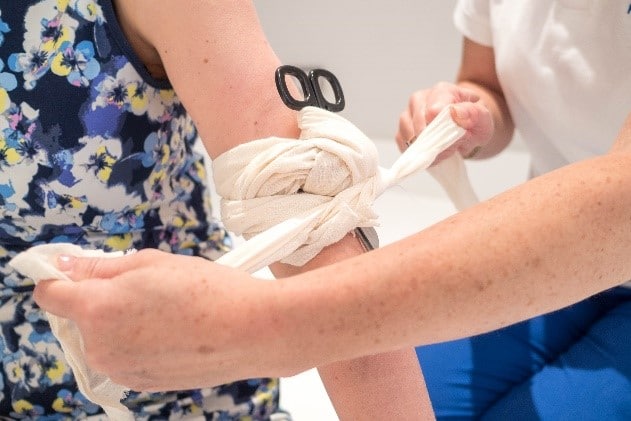 Knife crime is an increasing problem.

Every day we hear more heart rending stories of young lives cut short and families destroyed as a result of this perpetual violence.

Not everyone is fatally stabbed and often if they receive immediate and appropriate first aid  in the first vital minutes following the stabbing then they can go on to make a full recovery. However, not many people have the skills or confidence to help.

If someone has been seriously stabbed and are bleeding from an artery, it is possible for them to lose a critical amount of blood within a very few minutes. It is therefore imperative that more people are aware of the importance of acting fast and know how to help.

This article takes you through step by step, how to identify and control a potentially catastrophic bleed.

First Aid for Life regularly teach these first aid skills in schools and youth clubs and in doing so, are able to highlight to children the dangers of carrying knives.

You are 5 times more likely to be stabbed (usually with your own knife) if you carry a knife – so rather than making them safer, carrying a knife is proven to make young people more at risk.

Always ensure the area is safe and you are not in any danger, before commencing any first aid.

Protect yourself and wear gloves if possible.

Talk to the casualty and quickly establish if there is any response, or if they are unconscious.

If they are unconscious and breathing, put them into the recovery position and treat any obvious bleeding.

If they are unconscious and not breathing – if there is a life-threatening bleed that you are unable to stop with direct pressure – then this is a catastrophic bleed and is a priority over resuscitation. If there is no obvious pulsating bleed, and they are unconscious and not breathing – then call for an ambulance (and a defibrillator) and commence CPR immediately.

How to stop bleeding

For an external bleed: Bleeding from a major artery will result in bright red frothy blood that pulsates from the body – this is extremely serious and is a potentially catastrophic bleed. This sort of bleed can kill someone in just a few minutes.

Bleeding from a major vein can also prove fatal, the blood tends to be deep red and flows rather than pulsates. A venous bleed may be easier to stop.

The European Resuscitation Council guidelines on catastrophic bleeding 2015, state that tourniquets and haemostatic dressings are indicated only once direct pressure has been tried and been insufficient. Direct pressure to the site of the wound is always the initial first aid intervention of choice for a community first aider.

Remember too that this is a crime scene. Preserve any evidence and don’t interfere with anything or move anything other than what you need to do in order to administer life-saving first aid.

Further points to remember when treating a victim of serious bleeding

Catastrophic bleeding – when blood loss is more important than CPR

Most bleeds can be controlled with direct pressure. However, with a catastrophic bleed, the casualty can lose a critical amount of blood in just 3 minutes.

With an external catastrophic bleed there will be a lot of blood. If the bleed is in a limb and you are unable to stop the bleeding with substantial direct pressure, you may need a tourniquet.

If the bleed is in the trunk of their body, you may need to locate the source of the bleeding by placing your finger or hand into the bleeding cavity. Once you have identified the source of bleeding, the cavity needs to be packed with an improvised or ideally a commercial sterile haemostatic dressing.

To treat an open chest wound – the previously recommended training of occlusive dressings secured on 3 sides, is no longer advised. Instead just leave the wound open and control any bleeding with direct pressure or a non-occlusive dressing.

If someone is bleeding from their limb and the bleed is pulsating and unable to be stopped with direct pressure – then it is recommended that you use a tourniquet. A commercial tourniquet will undoubtedly be more effective and easier to use, however an improvised tourniquet will work and save lives.

How to make an improvised tourniquet 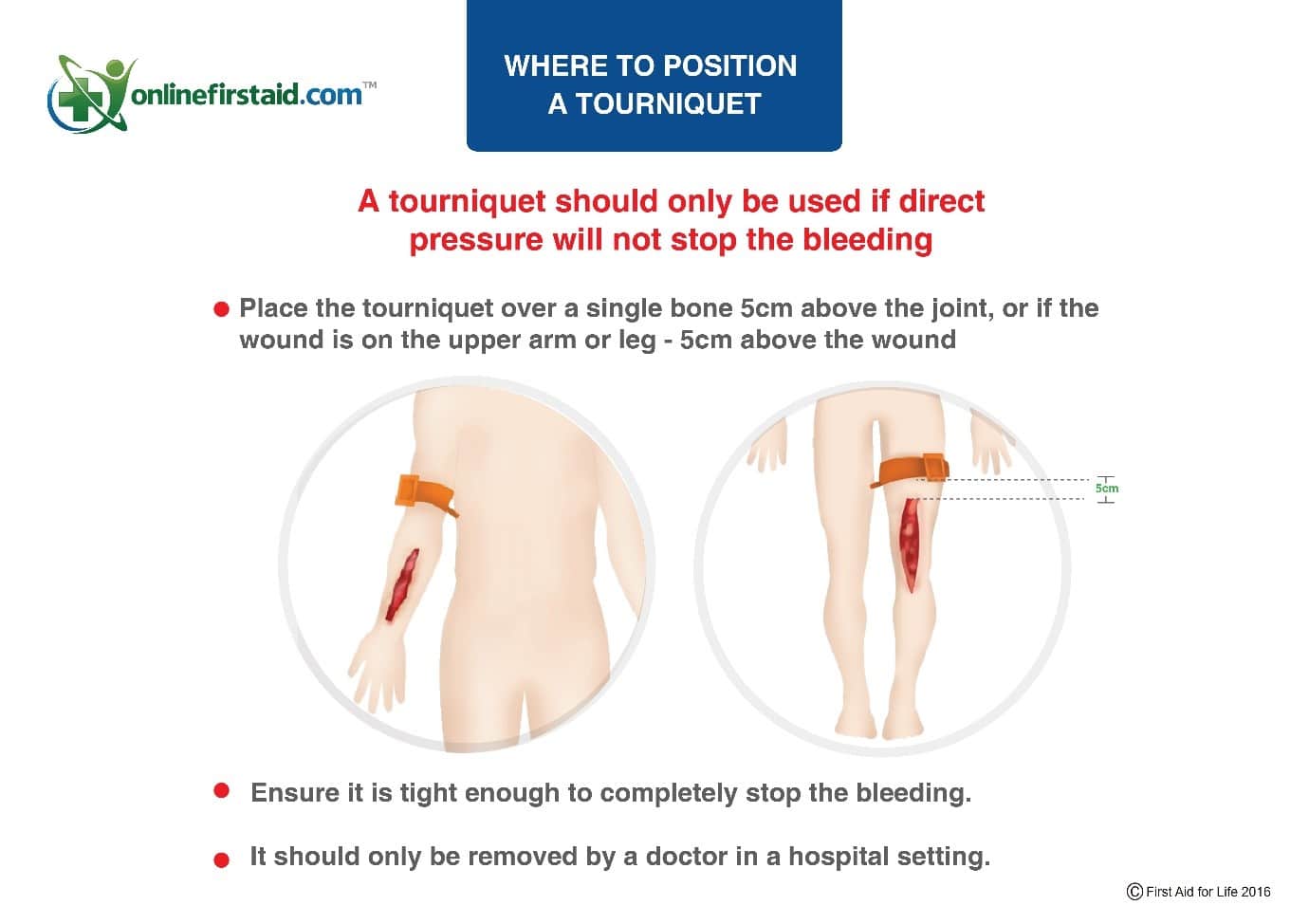 One of the easiest ways to make an improvised tourniquet from the contents of a standard first aid kit is to use a triangular bandage folded into a broad fold bandage and to tighten the tourniquet using scissors as a windlass. If you have access to cutlery, such as a table knife, this would be even better as otherwise you no longer have your scissors available to use.

Please note: A tourniquet should be at least 4cm wide to prevent localised damage to nerve tissues.

If there’s a clean cut through an artery, for example in a deep incised wound, the artery can contract back up the arm or leg. This is why you should place the tourniquet at least 5cm (or 2 inches) above the wound.

You may find other guidance on the positioning of a tourniquet, such as applying the first tourniquet mid-point over a single bone. This advice is also acceptable, so long as the tourniquet is positioned proximal to the wound (closer to the trunk of the body). 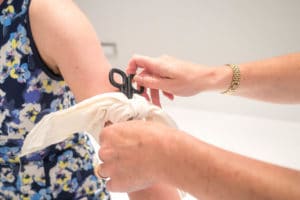 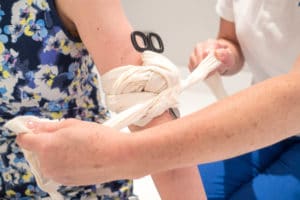 5. Ensure it is put on tight enough

Please note it will be extremely painful for the casualty to have a tourniquet applied, but it is absolutely vital that the tourniquet is applied tight enough to entirely stop the bleeding.

If a tourniquet is not on tight enough it can make things worse as it can occlude the veins, but arteries may be harder to stop as they are less easy to get to and if the venous return is stopped by the tourniquet, the only place for blood to come out is from the wound.

6. A tourniquet should only be removed by a doctor in a hospital environment

Unsuitable alternatives for an improvised tourniquet

A tie is likely to be too thin. A leather belt is also unsuitable as it is too tough and rigid to use with a windlass; you will be unable to provide sufficient force by hand to tighten it sufficiently to provide enough pressure to stop the blood flow.

A tourniquet should be at least 4cm wide to prevent localised damage to nerves tissues.

A tourniquet must be put on sufficiently tight to stop the bleeding. If it is not tight enough it can actually result in increasing blood loss. It may be necessary to apply more than one tourniquet to completely stop bleeding.

Please remember that although tourniquets can save lives, their use should not be taken lightly. They remain a second-line treatment when direct pressure is not possible or insufficient to control bleeding.

How to help a Choking Baby, Child & Adult
How to Help if your Child Eats Something Poisonous
9 top tips to prevent falling and first aid advice if we fall
Choking - how to help an adult, baby or child

Cycle helmets – Do they really save lives?
How to enjoy a flipping good pancake day without becoming an injury statistic
Why is teaching First Aid in Schools crucial?
The Latest Early Years Guidance for First Aid 2017